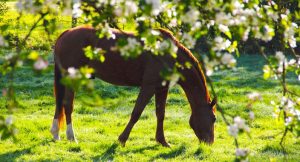 Laminitis is a painful, disabling, common and costly disease of the horse and pony with many causes; the digestive and metabolic forms are linked to equine nutrition.  Laminitis has major economic and welfare implications and can affect any member of the equine family (horses, ponies, donkeys, and mules). Equine laminitis is a systemic disease, often linked to hindgut disturbances; its final manifestation is inflammation of the lamina of the hoof, and downward rotation of the coffin bone. Treatment of laminitis is difficult because clinical signs of laminitis are apparent only after laminar tissues have undergone inflammatory and degenerative changes. There are a myriad of different problems that can cause laminitis or increase the potential for it to occur. Nearly half of all reported cases of laminitis in the US occur in horses at pasture, specifically lush spring pasture.

Laminitis in equines can be caused by ingestion of high amounts of sugar and starch which exceed the digestive capacity of the small intestine, the undigested material flowing into the hind gut causing a proliferation of lactic acid bacteria. This may result in reduced hindgut pH, which, in addition to hindgut acidosis, may lead to a cascade of events culminating in compromised blood flow (and thereby reduced nutrient supply) to the foot resulting in laminitis.

During photosynthesis, green plants ‘fix’ atmospheric carbon dioxide in the presence of light, resulting in the production of non-structural carbohydrates (NSC; simple sugars and starches). When sugars and starches are produced in excess of the energy requirement of the plant for growth and development, they are stored in the plant. Studies have shown that environmental conditions cause significant changes in the amounts of NSC that accumulate in forage plants. Spring grass and to a lesser extent autumn grass is higher in NSC than summer or winter grass. Other environmental factors, including light intensity, temperature, fertilizer, and water availability also affect NSC accumulation on grasses. For example water restriction will reduce the growth of the plant but will not affect the plant’s capacity for producing sugar and starch resulting in elevated concentrations of NSC.

The good news is that preventing pasture associated laminitis is relatively simple: limit the horse’s access to pasture. However not all horses need restriction from spring grass. Healthy horses and ponies that are not overweight and have never suffered from laminitis before may not require restricted pasture turnout in the spring. Decisions regarding whether and to what extent affected horses and ponies can be allowed access to pasture must be made on a case-by-case basis. The following points summarize current suggestions for avoiding high NSC intakes by horses and ponies at risk for pasture laminitis:

Animals denied access to pasture for most or all of the day, require provision of alternative feedstuffs. Horses at maintenance require approximately 2.0% of their body weight as forage or forage plus supplement to meet daily nutrient requirements. Grain and sweet feeds should not be fed, and the feeding of other ‘‘treats,’’ such as carrots and apples, should be discouraged. Forage (as hay or hay substitute, such as forage pellets or cubes, chop, chaff, or haylage) should be the primary, if not sole, energy-providing component of the ration. Lucerne hay or other legumes, such as clover, on average, have lower NSC content when compared with grass hay but have considerably higher calorie/energy content. Generalities regarding carbohydrate value of forages should in most cases, however, be avoided.  Ideally, hay should be analyzed for sugar and starch, and should be reviewed before selection.